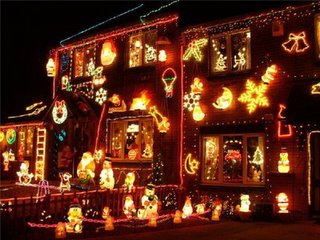 I never hear the word "decry" for eleven months of the year, but I get it morning noon and night at Christmastime. Seems like everyone's decrying some aspect of the Christmas thing, and if you look in more than one place, you'll find people decrying the opposing angles of the same Christmas condition. Christmas is too religious for some. It's too mercenary and secular two doors down. Me, I think Christmas is too tasteful.

Now, Christmas was a big deal when I was young and Johnson was president. We weren't wealthy, and your birthday and Christmas were the only days you'd get any swag. And we'd study the Sears catalog like we study Victoria's Secret catalogs now, and make our Christmas list, and then we'd be schlepped all over creation in a Rambler station wagon or a Dodge Dart with a steel dashboard or a Chevy Impala convertible with a hole in the roof to our relative's houses, and be spoiled a bit by their generosity. None of them were wealthy either, but they always seemed to have the time and money and affection to get even their most obscure nieces and nephews a little something. The younger you were, the better the present generally was, because after all, it's easier to buy a present for a child, isn't it?

What all those homes had in common when we visited was hospitality, and garish and hamfisted Christmas decoration. Jimmy Stewart was very much alive, but Martha Stewart hadn't appeared on the scene yet, and it showed. Metallic white fake Christmas trees, with a rotating muticored spotlight aimed at it, big red, blue, and green bulbs strung along the outlines of the house, plastic santas guarding plaster creches, spray-on frost in the windows, cheap looking tinsel and home made tree ornaments that looked like you wore your mittens when you made them. It knew no race, or creed, or social station; it was all bad, and lovely.

And your Aunts would hug you, smelling of lilac perfume and the kitchen, and slip you quarters on the way out, your Uncles would tell stories and and roar the loudest at their own japes, and when you got older they'd crush your hand in a welcoming handshake to see if you still squealed.
The music was lively, and sometimes wistful, which was nice. Christmas in 1965 was only twenty years removed from WW2, and thirty from the depression, and most all my relatives were old enough to remember when Christmas wasn't so jolly. And the perspective that the emergence from true want and danger lent to their mood was like the bubbles in champagne.

I can't bring myself to decorate in the garish style of my youth. Jimmy Stewart's passed away, and he's on the flatscreen at Mr Potter's now only, but Martha Stewart is in the here and now, out of jail and demanding once more that we straighten up and garland ourselves properly. My Aunts and Uncles have made their way to their reward, many of them, and the others are far away in distance if not in our hearts.

But I have a weakness now that I indulge by visiting websites devoting to pointing a jaundiced finger at bad Christmas yard displays. I wonder: Am I the only one there, with a tear in his eye, remembering how genuine, and fun, and innocent these things were to the dearest people?

I cometh to bury Caeser, not to praise him.

Still, I'd like to visit one more time; put the kettle on.