It’s trying being right all the time. It’s a curse really. Generally, it takes weeks and years to be proved right. Last week, it took two days.

Here’s what I wrote in my last essay,
Greenspan’s Got His Head up His Housing Bubble:

5. Some people are going to get killed in the housing market.

They always do. And some lenders will take it on the chin. But how does that have anything to do with rising home values? People are investing exorbitant amounts in their homes in places where their homes can become almost worthless, but that’s not a housing bubble. Spendthrift and/or corrupt public administrations, who overregulate business and building but take a laissez faire attitude towards criminals, all the while jacking up taxes inexorably, are far more likely to make people overpaying for property regret it eventually. But that’s politics, not banking.


If that’s not a precise description of what happened in New Orleans last week, I don’t know what is. It’s jarring to read it now and consider that many literally got killed.

How’s your investment in real estate in New Orleans looking now? The hurricane didn’t kill it, the local and state government did. And if you owned property there, after the mayor and the governor and the police chief were done letting it be ransacked for valuables, they turned it into a grave marker for a city.

If the hurricane had gone through there, and done its worst, but the mayor had followed the evacuation plan for the city, and the governor had delared an emergency and called out the national guard and secured the city, New Orleans would be a big fat FEMA disaster check from being rebuilt and going back to the way it was before. Probably better.

Now, a big fat check times ten or one hundred or a thousand is certainly going to be written, no doubt, but will anyone be foolish enough to return to that city?

New Orleans was already shedding population, one of the few areas of the south to do so, because of the municipal corruption and crime that plagued it, since, well… since Jefferson bought it. Actually, it was a sewer of corruption when the French still owned it, so I guess you’d have to go back to Indians to find a square dealer in the area. Hell, who knows about them? Maybe it’s in the water. And there’s always been a lot of water.

A lot of the gainfully employed people in that town got out on their own, and I don’t think they’ll clamor to return any time soon after watching what one heavy rainstorm turns the town into. And many of the poor souls left behind are on public assistance or medical disability, and when you think about it, they can live anywhere. They don’t own the property they live in, generally, and
since New Orleans will be uninhabitable for months, perhaps years, they’ll likely grow accustomed to the places they are relocated to, and think to themsleves: what could make me want to go back to a place where the mayor sends me to languish in a football stadium without food, water, medicine, sanitation, or security, until I die or am rescued by the federal government?

I have family in Biloxi, Mississippi. Many forget that it was Biloxi, not New Orleans that got creamed by the hurricane, a direct hit. When I finally saw the pictures of Biloxi, I was stunned. The entire beachfront, and block after block of adjacent buildings, was squashed flat like an atom bomb test site. I feared the worst for them. They called, after a day or so, and got a message to my father that they were all right, and had taken in their neighbors who had lost the roofs on their houses, as they has luckily kept theirs.
I wanted to write about that, the relief you felt when a loved one is found safe from a calamity, and share it with the world. So I did a search for a particularly compelling picture I had seen on the news of a few school buses in Mississippi, literally floating about like children’s toys, like fishing bobbers. I never found the picture.

I found this instead: 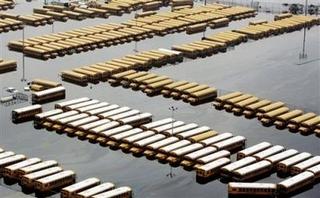 Those buses were parked in downtown New Orleans. Others (not so’s you’d notice it on the regular news, but it’s everywhere on the internet now) have picked up on this theme. Using a satellite image, they showed that there are over 220 buses parked in this one lot. Others found more nearby lots with many more buses available. You can also see the Superdome is less than a mile away. In a pinch, you can jam up to 100 people into one of these buses. That’s fifteen or twenty thousand people who could have been evacuated from that mess, in one trip. That’s pretty much all the people stuck in the superdome, by the way. And how many trips could have been made before the hurricane hit? How many more between the time the hurricane passed and the levee broke?

Both the the governor of Louisiana and the Mayor of New Orleans have the right, and according to the hurricane preparedness plan for the city, the obligation, to use those buses to evacuate the city, and can even use force, including lethal force, if need be, to compel the citizens to leave. He also has the authority to authorize the police to sieze and distribute anything else in the city, like food and water, that the public needs. The public doesn’t need dvd movies looted from the Wal*Mart, mayor, and neither did your police force. How much food and water left in that city was grabbed and hoarded, instead of being distributed by the police? Re-enacting” Lord of the Flies” is no way to run a city, Mr Mayor.

But there the buses sat. Insult to injury, they’re now leaking petroleum into the fetid water, making a bad situation just that much worse.

Mayor Nagin and Governor Blanco have escaped any criticism for their negligence by pointing their fingers and screaming. I doubt their attempt to escape the calumny and shame they deserve will work much longer. Too many of us know what a school bus is, how easy it is to operate, and can do arithmethic.

Someone named Jabbar Gibson knew better than to rely on people like Mayor Nagin, and found a bus in New Orleans and loaded up as many people as he could find and drove them to Houston. You can read about the resourcefulness, neighborliness and courage of 20 year old Jabbar and his renegade bus in the Houston Chronicle here:

You’ll have to wait to pin a medal on him, at least until the police drop the criminal charges they were considering against him for commandeering the bus . Apparently he should have looted a Wal*Mart alongside a New Orleans policeman if he wanted to be treated “fairly.” Saving seventy five people while the Mayor dithered didn’t impress anybody right off. I’m sure they’ll come around eventually.

Perhaps the cell they considered setting aside for Jabbar Gibson could be better used to house Mayor Nagin for not allowing the hundreds of other buses in the city to be “commandeered”in the same fashion.

Housing bubble. It never occurred to me until this very moment that that seems like a bad pun too. I didn’t mean to make light of all that misery. But I suggest that if you’d like to avoid being caught in a housing bubble, you know, the financial kind, not just the one with bubbles coming out of your house , I’d stop listening to doom and gloom in the media about the inevitablility of Housing Bubbles based solely on the infantile knee-jerk assumption that what goes up, must go down. Simply avoid living in places administrated by people like Mayor Nagin and Governor Blanco.

If I were you, when the authorities let Jabbar go, I’d follow him, and move in next door. You’ll be fine.
Posted by SippicanCottage at 7:30 AM